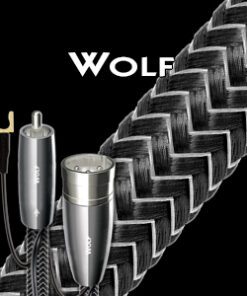 The Audioquest Wolf Subwoofer cable is the largest member of the family Canidae, which includes all large-breed dogs, foxes, and coyotes. Wolves are known for extreme intelligence, a trait that enables them to survive in the wild. Wolves are also famous for their evocative and powerful howl, which they use to communicate with other wolves. While wolves are commonly thought of as aggressive and “vicious,” they are generally averse to actual fighting and are, in fact, often quite friendly with other dogs or humans they come into contact with. Since wolves are capable of forming strong emotional attachments, it’s no wonder that humans feel an affinity for these complex and beautiful animals.

Solid conductors eliminate strand-interaction distortion and reduce jitter. Solid silver-plated conductors are excellent for very high-frequency applications. These signals, being such a high frequency, travel almost exclusively on the surface of the conductor. As the surface is made of high-purity silver, the performance is very close to that of a solid silver cable but priced much closer to solid copper cable. This is an incredibly cost-effective way of manufacturing very high-quality subwoofer cables.

Any solid material adjacent to a conductor is actually part of an imperfect circuit. Wire insulation and circuit board materials all absorb energy (loss). Some of this energy is stored and then later released as distortion. All of Wolf’s conductors use Air-Tube insulation because air absorbs next to no energy, and FEP is the best extrudable solid insulation and absorbs less energy than other materials. The FEP Air-Tubes used in Wolf have almost nothing but air around the solid 10% silver conductors.

All insulation slows down the signal on the conductor inside. When insulation is unbiased, it slows down parts of the signal differently, a big problem for very time-sensitive multi-octave audio. AudioQuest’s DBS creates a strong, stable electrostatic field that saturates and polarizes (organizes) the molecules of the insulation. This minimizes both energy storage in the insulation and the multiple nonlinear time-delays that occur. Sound appears from a surprisingly black background with unexpected detail and dynamic contrast. The DBS battery packs will last for years. A test button and LED allow for the occasional battery check.

The three conductors in “Triple-Balanced” Wolf cables ensure that whether prepared with RCA or XLR plugs, the positive and negative signals have equally low-distortion conducting paths. The 100% coverage shield is never used as an inferior conductor.

This plug design enables a perfect heat-free connection between cable and plug. The connection between the plug and conductors is made using AQ’s Cold-Welded System, which provides a superior connection that ensures that the structural integrity of the conductor is kept completely intact.  The Cold-Welded System refers to a combination of high pressure at the point of contact and the use of copper- or silver-impregnated paste. (Wolf’s silver conductors get silver paste.) XLR plugs are also available.